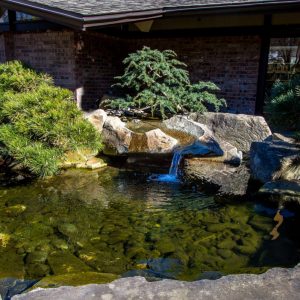 A small library above the Island’s Port Madison mill store in 1863 was the second community public library in all of Puget Sound. A number of small libraries were supported on the Island during the first half of the 20th Century.

Since 1947, Kitsap Regional Library has provided library service and the strength of a county-wide collection to Island residents.

The first Rotary Auction in 1960, a community-wide rummage sale that is now an Island institution, was held to raise money for a new library at the corner of Madison Ave and High School Road. The library was designed by John Rudolph and built in 1962. A children’s library space was created in the lower floor of the library in 1968. Supported by local fundraising, there was a building addition in 1982 and 1997.  In 2017, the library was extensively remodeled.

Three gardens surround the library. Junkoh Harui and the Bainbridge Island Japanese American Community designed and built a magnificent Japanese garden on the west side of the library in 1998. The perennial gardens, beautiful in every season, were designed by nationally recognized garden writer Ann Lovejoy and are maintained by Ann and the “Friday Tidies” every Friday morning. On the NE side of the library, you’ll find the cool green fern garden, designed and maintained by John van den Meerendonk.  The grounds were recognized by the American Library Association as the Best Library Garden in 2000.