Please Note: This event has expired.

Stand Up with Dan Rosenberg and Friends - One Night Only! 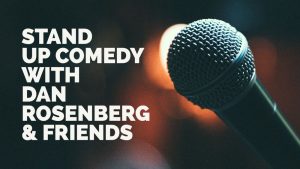 After an almost two-year hiatus, stand up comedy is BACK at BPA! (Well ok, technically, it’s over at Bainbridge Cinemas while BPA’s theater is undergoing a major renovation, but still, Hooray!)

Come see some of the best nationally touring headliners from Seattle right on the BPA stage. We could have booked any of these comics as a headliner and had a great show, but instead, we booked them ALL!

Bo Johnson
Bo Johnson is a comedian from Seattle, Washington. He can be found featuring and

After an almost two-year hiatus, stand up comedy is BACK at BPA! (Well ok, technically, it’s over at Bainbridge Cinemas while BPA’s theater is undergoing a major renovation, but still, Hooray!)

Come see some of the best nationally touring headliners from Seattle right on the BPA stage. We could have booked any of these comics as a headliner and had a great show, but instead, we booked them ALL!

Bo Johnson
Bo Johnson is a comedian from Seattle, Washington. He can be found featuring and headlining clubs, breweries, and dingy bars across the country. His stand-up was featured on season two of Kevin Hart Presents: Hart of the City on Comedy Central. The following summer Bo taped a set for LOL Live! at the prestigious Just For Laughs comedy festival in Montreal.

He was a finalist in the 39th annual Seattle International Comedy Competition and is a regular at festivals including Bumbershoot, SF Sketchfest, the Double Down Comedy Experience sponsored by Zappos, and Life is Beautiful in Las Vegas. His prank video “Bo and Matthew Sneak into a Movie Theatre” went viral on Youtube and has also been seen on MTV’s Ridiculousness and NBC’s Caught on Camera with Nick Cannon.

Dan Rosenberg
Dan Rosenberg is a comedian, writer, radio host, and emcee performing comedy for over three decades. He has appeared at the top comedy clubs across the country, including the Laugh Factory and the Improv. He has also performed at the Just for Laughs festival in Montreal, as well as comedy festivals in Las Vegas, Boston, and New Orleans. He has hosted radio shows for CBS Radio in Los Angeles and Seattle and for National Lampoon Radio on SiriusXM. He is the author of The Book on Hosting: How Not to Suck as an Emcee and has held workshops nationwide helping comedians become better emcees.

Duane Goad
Duane Goad is a Canadian-born, Seattle-based comedian who has entertained audiences all over the U.S. and Canada with his quick, sarcastic, and self-deprecating style of comedy.

Duane has performed at some of North America’s top comedy clubs including Yuk Yuks, The Improv, and Comedyworks. He’s been featured at numerous comedy festivals including Funny or Die’s Oddball Comedy Festival, The Las Vegas Comedy Festival, The Bumbershoot Arts Festival, and The Vancouver Comedy Festival. Duane was a finalist in the Seattle International Comedy Competition and as an opening act, he has shared the stage with some of the best comics in the business such as Jim Gaffigan, Flight Of The Conchords, Bill Burr, Brad Garrett, Maria Bamford, The Impractical Jokers, Damon Wayans and music superstars The Jacksons.

If he looks or sounds familiar, then you may have seen or heard him in numerous commercials including The FX Network, Gillette Razors, Ford, and Microsoft. Recently, Duane was a contributing writer and voice-over talent for MSN-TV. His work on shows like ‘In Pictures’, ‘Late Night In Daylight’ and ‘Nerdology’ combined, had over 25 million viewers.

Erin Ingle
Erin Ingle may just be Seattle’s sharpest stoner and its tenderest feminist, with comedy that’s equal parts joy and judgment. Erin has been performing stand-up since 2012 and currently headlines around the PNW.  Erin has been featured on Comedy Central, NBC, and at the “10,000 Laughs,” and “Laugh Your Asheville Off” comedy festivals, and her monthly comedy Q&A show “Is This Normal?” brings in a regular cult crowd. She hopes one day to be friends with someone who owns a glamorous boat.

Mary Lou Gamba
Mary Lou Gamba is an East Coast transplant living it up in the PNW. A middle-aged teenager and delightfully dirty bird, Mary Lou will get you laughing till you snort with her charming and silly exaggerations of her wacky life.  As a regular open for national headliners, this pint-sized dynamite burns down comedy clubs, bars, and locker rooms all over the country. Mary Lou has been featured in HBO’s Women in Comedy Festival, Bumbershoot Music and Arts Festival, and was a contestant in the 2017 Seattle International Comedy Competition. Watch out, she’ll steal your chicken!

Connect with this Organization: DONATE 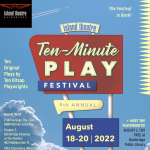 There are currently no reviews/comments for this event. Be the first to add a review/comment , and let folks know what you think!

If you’re angling to escape to an island – why

We couldn’t be more excited for the return of Ba

Take us out to a ballgame! But on Bainbridge Isl

Summer is here and the Fourth of July edition of o

Ever wonder what it's like to LIVE on #BainbridgeI

After two years of waiting, dust off your best sta

We're ready to leave this week in our wake and sai

It’s been too long…but the wait is ALMOST over

If you’re looking for an idyllic family summer r

May is Bike Everywhere Month! So hit the open ro

Feed your soul and let your feet wander. 👣👣

Be Kind - We only have one Earth.  On this Earth